The (Almost) Entirely True Story of the World Series of Poker 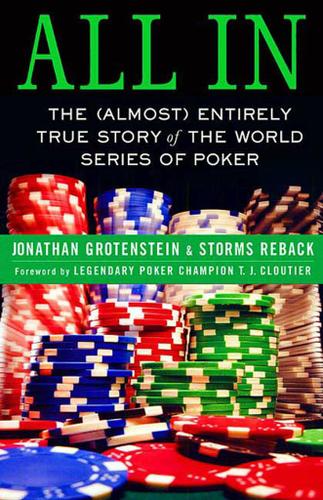 All In is the story of the greatest tournament in the world—the World Series of Poker. It began in 1970 as a mere gathering of Texas road gamblers who rendezvoused at Binion's Horseshoe in downtown Las Vegas each spring. Today it has become a cultural phenomenon, attracting exhaustive national television coverage, legions of fans, and thousands of players, from legendary professionals to amateurs with little experience outside of their home games. And with good reason. The prize money for the 2005 tournament was more than the purses of the Masters, the Kentucky Derby, and Wimbledon combined.
Professional poker players themselves, authors Jonathan Grotenstein and Storms Reback combine interviews, firsthand accounts, and extensive archival research into a comprehensive and highly entertaining look at this incredibly unique experience, recounting its history through the breathtaking and sometimes brutal hands played at the Horseshoe's tables. They introduce colorful and seemingly fearless characters who, over the tournament's thirty-five-year history, have been lured by huge paydays—and the chance to play against the best in the world, including the legends:

· Veteran road gamblers like Doyle Brunson and Amarillo Slim, whose success at the tables helped push poker into the national spotlight
· The troubled poker savant Stuey "The Kid" Ungar, who would eclipse his unlikely debut at the World Series with an even more improbable comeback
· And many others like "Poker Brat" Phil Hellmuth, who proved that you didn't need to be old or from Texas to master the game, and Chris Moneymaker, the man with the impossible name who parlayed $40 into $2.5 million

All In is a no-limit look at the phenomenal transformation of poker from a vice hidden in shady back rooms into the hottest game on the planet. Where some of the World Series's simple charms have been lost, they have been replaced by a complicated human drama, huge in scope, where luck and skill forge an exciting and unpredictable intersection. Simply put, there is nothing else like it in the world.

"If my old pal Benny Binion were still with us, he'd wet his britches seeing that his little publicity stunt in 1970 between a few Texans became a tournament with over $25 million in prize money. If you've ever played a hand of Texas Hold'em, you won't want to miss this book."
—Amarillo Slim Preston, 1972 World Series of Poker champion and author of Amarillo Slim in a World Full of Fat People

"Reading this book is like having Johnny Moss, Doyle Brunson, Amarillo Slim, and every single one of the World Series of Poker champions over to the house for dinner, a beer, tall tales, and a fine game of No Limit Texas Hold'em."
— Phil Gordon, coauthor of Poker: The Real Deal and cohost of Celebrity Poker Showdown