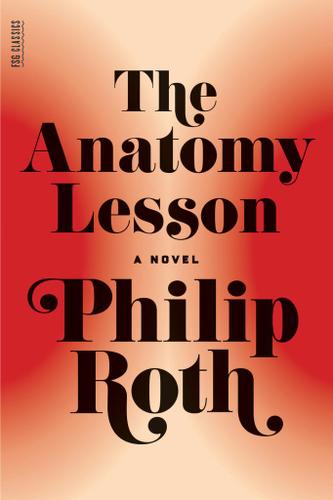 The writer Nathan Zukerman comes down with a mysterious physical affliction--pure pain, beginning in his neck and shoulders, invading his torso and taking possession of his life. Zukerman, whose work was his life, is unable to write a line. Now his work is trekking from one doctor to the next--from orthopedist to osteopath to neurologist to psychiatrist--but none can find a cause for the pain and nobody can assuage it.

So begins Philip Roth's strangely comic new novel, The Anatomy Lesson. In it, we find Nathan Zukerman beset at age forty not only by his pain but by his past. He seriously wonders if he ought to be a novelist at all. At his wit's end, bewildered by both the obstinate pain and the isolating profession, and unconsolable by his "harem of Florence Nightingales"--Gloria, his accountant's wildly mothering wife; Jaga, the depressed Polish refuge from the hair-treatment clinic (to add to his suffering, Zukerman is going bald); Diana, the distressingly self-possessed Finch College heiress; and the temptingly levelheaded painter Jenny--Zukerman tries to pin his catastrophe on some source he can confront.

There is no shortage of candidates. Zukerman's brother blames his acerbic best-seller Carnovsky, for ruining the lives of their late parents, and will have nothing to do with him. There's the critic Milton Appel, once Zuckerman's literary conscience, now his scourge--the Grand Inquisitor of Inquiry magazine, the New York Jewish cultural monthly. Searching desperately for a diagnosis that will lead to a cure, Zuckerman asks himself if the pain can have been caused by his adversaries, or by his astonishingly intractable grief for his mother, or by the disgust he has come to feel for the literary vocation he once loved. And while he is wondering, his dependence on painkillers grows into an addiction to Percodan, marijuana, and hundred-proof vodka.

In the last half of The Anatomy Lesson, Zuckerman breaks out of invalid imprisonment in his Manhattan apartment and sets off on a journey to escape the pain, the adversaries, the grief, and the career--a journey into a new existence, a search for a "second life." Persuaded that a doctor's life is everything a writer's is not, Zuckerman flies to Chicago with the intention of applying to medical school at his alma mater. Though the pain he encounters there is worse even than what he's fled, the startling quest for the second life provides some of the funniest scenes in all of Roth's fiction.

With the serious playfulness and extravagant insistence characteristic of his work, Roth, in his fourteenth published book, presents an astonishing antithesis to The Magic Mountain: The Anatomy Lesson is a great comedy of illness. Roth's strength has always been the ability to depict the boisterous, the farcical, and the extreme in human behavior while revealing at the same time a world that immediately strikes the reader as real--what the English critic Hermione Lee has called, in writing of Roth's career, "a manner at once...brash and thoughtful...lyrical and wry, which projects through comic expostulations and confessions of the speakers a knowing, humane authority." The Anatomy Lesson is one of Roth's finest achievements in this vein--a comic masterpiece and brilliant finale to the Zuckerman trilogy.