The Anvil of the World 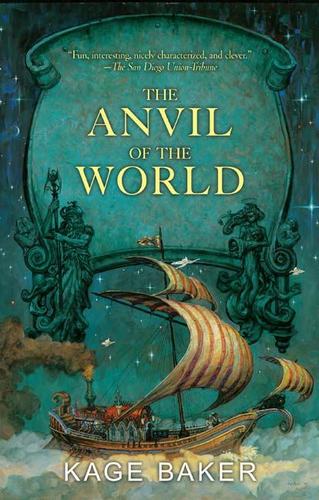 Kage Baker's stories and novels of the mysterious organization that controls time travel, The Company, have made her famous in SF. So has her talent for clever dialogue and pointed social commentary with a light touch. "Ms. Baker is the best thing to happen to modern science fiction since Connie Willis or Dan Simmons. She mixes adventure, history and societal concerns in just the right amount, creating an action-packed but thoughtful read," says The Dallas Morning News.

The Anvil of the World is her first fantasy novel, a journey across a landscape filled with bizarre creatures, human and otherwise. It is the tale of Smith, of the large extended family of Smiths, of the Children of the Sun. They are a race given to blood feuds, and Smith was formerly an extremely successful assassin. Now he has wearied of his work and is trying to retire in another country, to live an honest life in obscurity in spite of all those who have sworn to kill him.

His problems begin when he agrees to be the master of a caravan from the inland city of Troon to the seaside city of Salesh. The caravan is dogged by murder, magic, and the brooding image of the Master of the Mountain, a powerful demon, looking down from his mountain kingdom upon the greenlands and the travelers passing below. In Salesh, Smith becomes an innkeeper, but on the journey he befriended the young Lord Ermenwyr, a decadent demonic half-breed. Each time Ermenwyr turns up, he brings new trouble with him.

The outgrowth of stories Baker has been writing since childhood, as engaging as Tolkien and yet nothing like him, Smith's adventure is certainly the only fantasy on record with a white-uniformed nurse, gourmet cuisine, one hundred and forty-four glass butterflies, and a steamboat. This is a book filled with intrigue, romance, sudden violence, and moments of emotional impact, a cast of charming characters, and echoes of the fantasy tradition that runs from Lord Dunsany and Fritz Leiber to Jack Vance and Roger Zelazny.