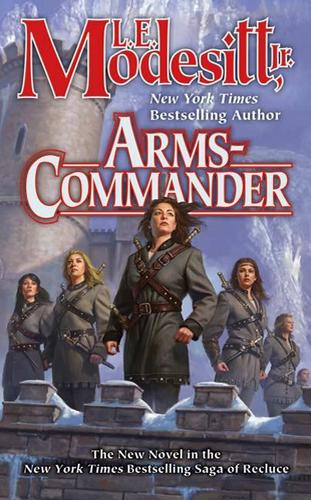 L.E. Modesitt, Jr.'s Arms-Commander continues his bestselling fantasy series the Saga of Recluce, which is one the most popular in contemporary epic fantasy.

The keep of Westwind at the Roof of the World, faces attack by the adjoining land of Gallos. Arthanos, son and heir to the ailing Prefect of Gallos, wishes to destroy Westwind because the idea of a land where women rule is total anathema to him.

Westwind dispatches Saryn, their Arms-Commander, a neighboring land to seek support against the Gallosians. To secure their aid, Saryn must pledge her personal support—and any Westwind guard forces she can raise—to the defense of its ruler.

The fate of four lands, including Westwind, rest on Saryn's actions.

“An intriguing fantasy in a fascinating world.”—Robert Jordan, New York Times bestselling author of The Wheel of Time® series

Other Series by L.E. Modesitt, Jr.
The Imager Portfolio
The Corean Chronicles
The Spellsong Cycle
The Ghost Books
The Ecolitan Matter