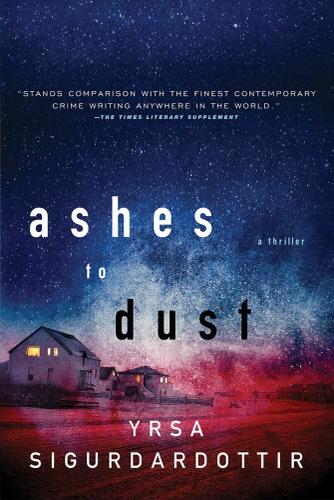 "I can see why so many people are enthusiastic about Yrsa's work. It's very engaging, fresh, and exciting." -- James Patterson

One of the finest Nordic crime writers working today, Yrsa Sigurdardóttir has been published to rave reviews worldwide. Now, with Ashes to Dust, she delivers a dynamite and timely thriller set at the site of a volcano.

In 1973, a volcanic eruption buried an entire Icelandic village in lava and ash. Now, hoping to make some cash, a crew is assembled to excavate the site and turn it into a tourist destination. Markús, who was a teenager when the volcano erupted, enlists the help of attorney Thóra Gudmundsdóttir to try to prevent the excavation from going forward.

When the digging continues and three fresh bodies (and a spare head) turn up in the basement of Markús' childhood home, Thóra begins to question Markús' motives for wanting to stop the excavation. His explanation for the bodies is complicated, and the locals seem oddly reluctant to back him up. As Markús' story begins to unravel, Thóra finds herself with an impossible task, defending Markús while trying to solve a quadruple murder that may very well implicate her client.

With unforgettable characters, unexpected twists, and superb psychological suspense, Ashes to Dust is a riveting thriller from a new international star.