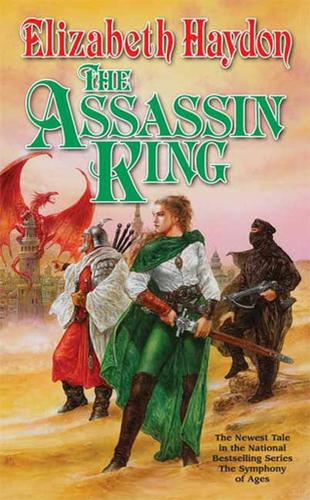 The Assassin King opens at winter's end with the arrival by sea of a mysterious hunter, a man of ancient race and purpose, who endlessly chants the names of the pantheon of demons that are his intended victims, as well as one other: Ysk, the original name of the Brother, now known as Achmed, the Assassin King of Ylorc.

At the same moment of this portentous arrival, two gatherings of great import are taking place. The first is a convocation of dragons, who gather in a primeval forest glade--the site of the horrific ending of Llauron, one of the last of their kind. They mourn not only his irrevocable death, but the loss of the lore and control over the Earth itself that it represents. The ancient wyrms are terrified for what will come as a result of this loss.

The second gathering is a council of war held in the depths of the keep of Haguefort: Ashe and Rhapsody, rulers of the alliance that protects the Middle Continent; Gwydion, the new Duke of Navarne; Anborn, the Lord Marshall; Achmed, the King of Ylorc, and Grunthor, his Sergeant-Major. Each brings news that form the pieces of a great puzzle. And as each piece is added it becomes quite clear: War is coming, the likes of which the world has never known.

Cataclysm, both large and small, await in this sixth volume of the USA Today bestselling fantasy series, The Symphony of Ages. A twisting, fast-moving tale, The Assassin King promises endless surprises--most of which lead to pain.