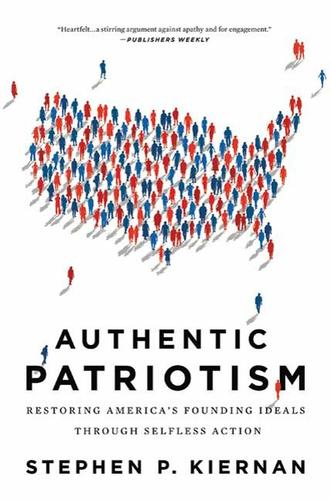 A provocative, inspiring account of our neglected American ideals and the people who are living them today--and restoring our nation's dream

Patriotism has become a loaded word: one that is wielded against people with whom we might disagree, or whose cultural origins don't match our own.

But our founding fathers--Washington, Jefferson, Adams, and others--saw patriotism as a dynamic force: an act of service, in an evolving nation that defined its purpose by offering all people a better way of life.

In Authentic Patriotism, author and award-winning journalist Stephen P. Kiernan explores the original ideals that have been lost in our current climate, where war and economic turmoil have eroded our sense of civic obligation. Kiernan describes "a nation adrift," out of touch with its origins--and then introduces a range of inspiring people who have revived our national purpose by taking action:

- The out-of-work college graduate who led an economic and environmental renewal of her blighted home community.

- The retired executive who pioneered a revolutionary concept in health care for people without insurance.

- The minister who created a legendary choir, with the goal of uniting children of different races, genders, and classes in one voice.

- The family who donated their daughter's heart, so that another might live.

These and other "New Americans" are profiled in a book that offers hope, ideas, examples, and practical resources for readers who want to renew the American spirit.