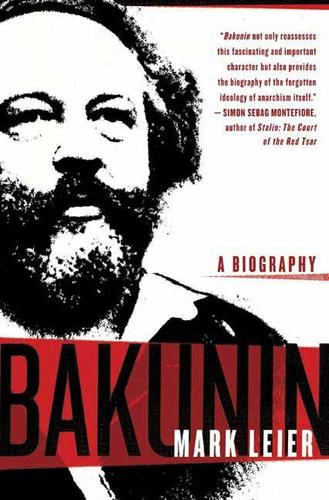 "The passion for destruction is a creative passion," wrote the anarchist Mikhail Bakunin in 1842. Since then, the popular image of anarchism has been one of violence and terror. But this picture is wildly misleading, and the media has done more to obscure anarchism than to explain it. Focusing on the street fighting and confrontations with police, mainstream commentators are unable to understand what anarchism is or why a philosophy with roots in the nineteenth century has resurfaced with such power at the dawn of the new millennium. To understand anarchism, it is necessary to go beyond the caricature presented by the media. In this new biography of Mikhail Bakunin, Mark Leier traces the life and ideas of anarchism's first major thinker, and in the process revealing the origins of the movement.
There was little in Bakunin's background to suggest that he would grow up to be anything other than a loyal subject of the Russian Empire. Instead, he became one the most notorious radicals of the nineteenth century, devoting his life to the destruction of the tsar and feudalism, capitalism, the state, even God. In the process, he became a historical actor and political thinker whose ideas continue to influence world events.
Bakunin is of keen interest these days, though the attention paid to his image continues to obscure the man and his ideas. Using archival sources and the most recent scholarship, Leier corrects many of the popular misconceptions about Bakunin and his ideas, offering a fresh interpretation of Bakunin's life and thoughts of use to those interested in understanding anarchism and social change. Arguing for the relevance and importance of anarchism to our present world, Leier sheds light on the nineteenth century, as well as on today's headlines, as he examines a political philosophy that has inspired mass movements and contemporary social critics.
Mark Leier shows that the "passion for destruction" is a call to build a new world free of oppression, not a cult of violence. He argues that anarchism is a philosophy of morality and solidarity, based not on wishful thinking or naïve beliefs about the goodness of humanity but on a practical, radical critique of wealth and power. By studying Bakunin, we can learn a great deal about our own time and begin to recover a world of possibility and promise. It is often said that we are all anarchists at heart. This book explains why.