From the Buchanan File 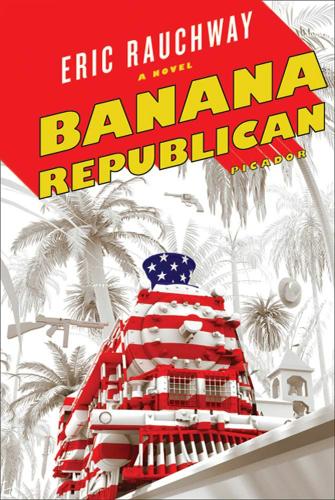 Depicted as braggart, brute, and bore in The Great Gatsby, Tom Buchanan has gotten a bad rap and means to correct the record. That weak-kneed, simpering cousin of his wife's, with his prattling about some lost idealized American individualism and rectitude, was not only a fool and a liar, but worse: a failed bond salesman. Pathetic. But by 1924 Tom has bigger problems than the pathos of the summer of '22. First, there's Aunt Gertrude, who has assumed control of the Buchanan fortune. Second, what with Daisy getting jowly and the maids indiscreet, there's little tranquillity at home. Third, a revolution is brewing in Nicaragua that's threatening to ensnare the family investments. So when Tom is dispatched to maneuver among Nicaragua's international corporate intrigues, machine-gun-toting rival political parties, and competing American intelligence agencies, he spies his chance.

A rollicking, outrageous, and altogether brilliant perversion of known facts, Banana Republican sends the sexist, racist, elitist Buchanan careening through America's brilliantly mismanaged intervention in Nicaragua in the early twentieth century. Eric Rauchway bends history to Buchanan's memoir as Tom blunders, shoots, and screws his way through the historical record and makes the case that greed and amorality have always been at the heart of the American dream.