Ichiro Suzuki And The Asian Invasion 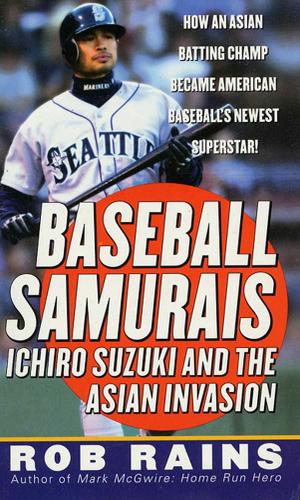 Seven-time batting champion for Japan's Pacific League, he is a paradoxical combination of modesty and ego, calling himself simply "Ichiro." But when the Seattle Mariners signed him to a fourteen-million-dollar contract, scoffers said the 5-foot-9 inch, 156-pound Ichiro wasn't even in the ballpark. He proved them wrong. With fast legs and an even faster bat, he led the Mariners to their best start in franchise history.

Now, sportswriter Rob Rains takes an in-depth look at Ichiro and the new wave of talented Japanese players, including last year's Rookie of the Year, Kazuhiro Sasaki of the Seattle Mariners, and Hideo Nomo of the Boston Red Sox, former Yankee Hideki Irabu and Mets outfielder Tsuyoshi Shinjo. American fans are learning what the Japanese already know-- these amazing players are already mapping out baseball's future, proving that this grand slam Asian invasion is here to stay...

With 8 pages of thrilling photos.