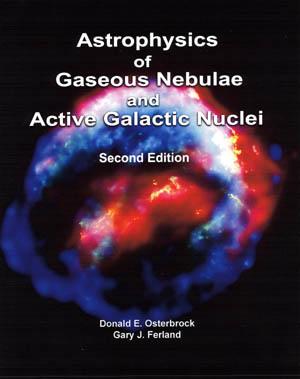 Thoroughly revised, expanded and updated throughout, this new edition ofAstrophysics of Gaseous Nebulae and Active Galactic Nuclei is a graduate-level text and reference book on gaseous nebulae, nova and supernova remnants, and the emission-line regions in Seyfert galaxies, radio galaxies, quasars, and other types of active galactic nuclei.  Much of the new data and many of the new images are from the Hubble Space Telescope and some of the largest ground-based telescopes in the world.  Two wholly new chapters have been added, one on infrared astronomy and the other on X-ray astronomy, reflecting the great advances in these fields.  This new edition also contains two completely new appendices, one a long primer on the quantum-mechanical concepts used in the analysis of nebular emission-line spectra, and the other a briefer description of molecular spectra.  Large amounts of new data on dust in nebulae and quasars, and the photo-dissociated regions containing neutral atoms, molecules, and dust within and around them, have also been added to the book.  Thus, the previous edition of this classic text, which has been tried, tested, and widely used for thirty years, has now been succeeded by a new, revised, updated, larger edition, which will be valuable to anyone seriously interested in astrophysics.